Drifting Lands is an arcade shoot’em’up which combines this classic game-play with RPG elements and tries to do something different. It instantly reminded me of the old and classic games like Thunder Force III which were fun but somewhat lacking in satisfaction. While first offered on Steam in an alpha version that was free to download, the complete game finally makes its way to major platforms. Can Drifting Lands manage to infuse the old school game-play with a modern day twist? Let’s find out.

Great Customization – The most impressive thing about Drifting Lands is the amount of customization options present in the game. You can change the layout of your ship completely by upgrading its weapons, armor and much more. Sure, to upgrade your ship you need to grind in the levels and replay previous levels to get the required loot. This also lends to some increased replayability factor to Drifting Lands. The loot that you don’t require in upgrading your shop can be sold to the shop and the same can be used to buy a plethora of new gizmos to attach to your ship. This is easily the most unique prospect of Drifting Lands and that is why it is also one of key selling points of the game.

Impressive attempt at story-telling – Most of the time games of this genre don’t bother with a story or, at most, have a half-hearted attempt at one. Drifting Lands, on the other hand, tries harder than most to keep players invested in its story of a post-apocalyptic world and its survivors. It tells the story of how a world got destroyed and the land masses now simply float in the air. The remaining humans live on a massive ship called the ARK and they send out their pilots to fight back against the robots taking over the world. While it is uninspired and kind of cliche, it will be enough to keep players hooked for a while and creates a believable world. Ample amount of content – The game has a lot of content available for the players. While not necessarily good or meaningful, it boasts over 100 stages and a number of enemy varieties to support them. It does feel like it’s being padded out after some time and you may feel tired of the game before it’s completed but this is still an appreciable aspect for those players out there who want their game to have meat on its bones. There is also a large variety of ships to collect and customize and give more meaning to trucking through the large amount of randomly-generated levels gathering loot.

Stunning visual design – Colorful, vibrant and full of energy, Drifting Lands sports a visual style that is both pleasing to the eye and flashes off some great artwork. Everything from the enemy design to the UI of the game feels neat and fresh as it mixes 2D and 3D art styles so well. The maps are detailed very well and provide a great backdrop to the ongoing battles. The screen does get crowded from time to time, which should be expected from a shmup, but Drifting Lands manages to pull it off with a certain level of flair.

Incredible sound design – Complimenting its great visual design is the enamoring sound design of Drifting Lands. The soundtrack is brilliant with its ambient beats coupled with sound effects that are done very well. While it is nothing that you have never heard before, it is a very hearty sound design for its worth. 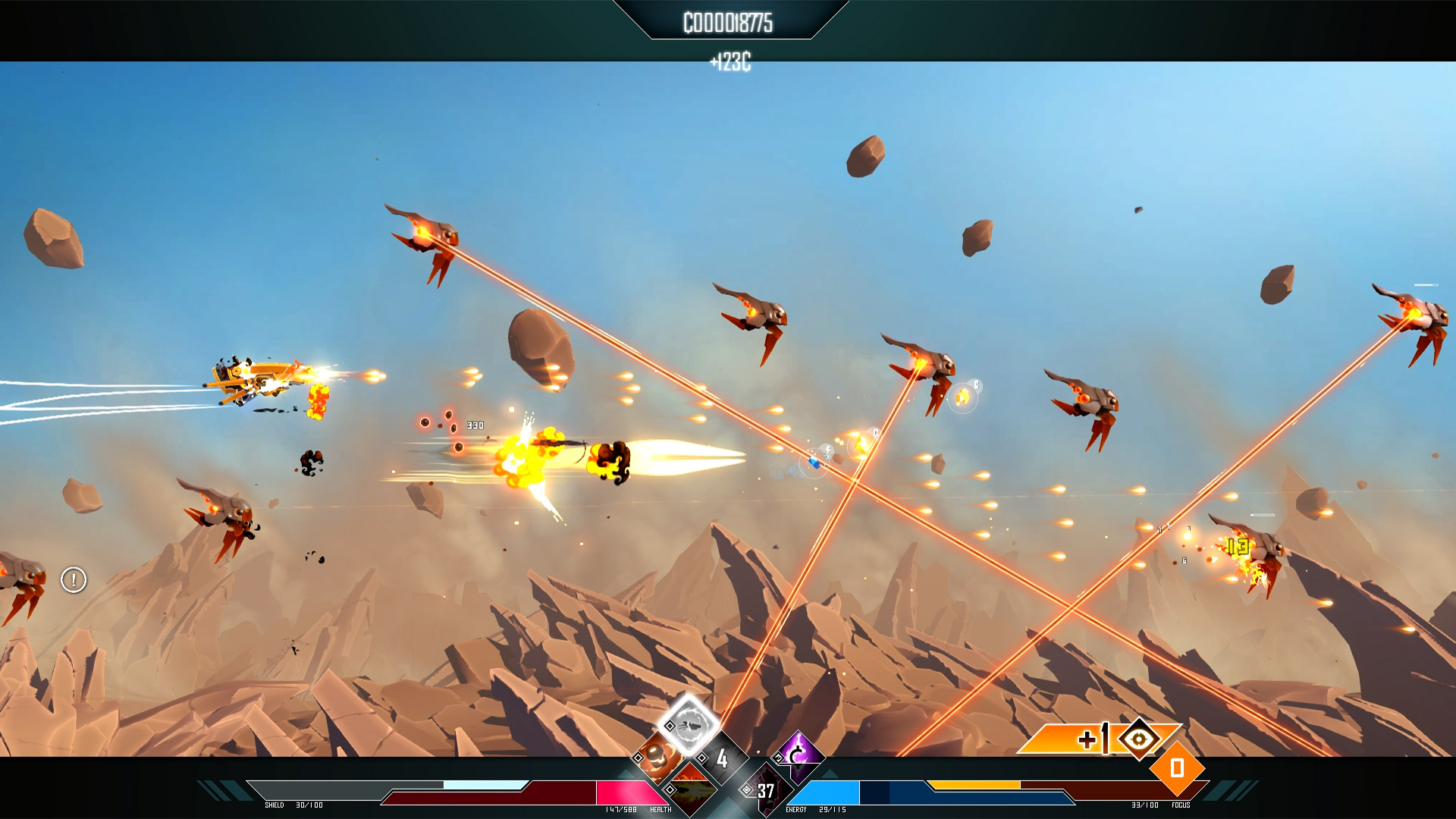 Gets repetitive quickly – The major flaw with Drifting Lands is the fact that it gets repetitive way too quickly. There are no varied mission objectives or anything that makes you keep going. Even the backgrounds start repeating themselves after a while and nothing new is left to see after that. A huge number of stages can be substantial but they need to be freshened up after a while and Drifting Lands fails completely on that front. It will only take you over 5-6 hours before you start getting bored of its repetitive nature and move on to something else.

Requires too much grinding later on – Remember how the game has an impressive amount of customization options and stuff? Well, all of that is hidden behind a wall of grinding which serves no other purpose than to make the game feel more repetitive and padded out. When it is minimal and you have just started, getting valuable loot and gear feels rewarding. When combining that with the repetitive nature of the game, though, replaying old levels just feels like a wasted opportunity when you already have a huge number of levels going forward. The grinding slowly builds up and all the sense of satisfaction is drained out by the end of a session. 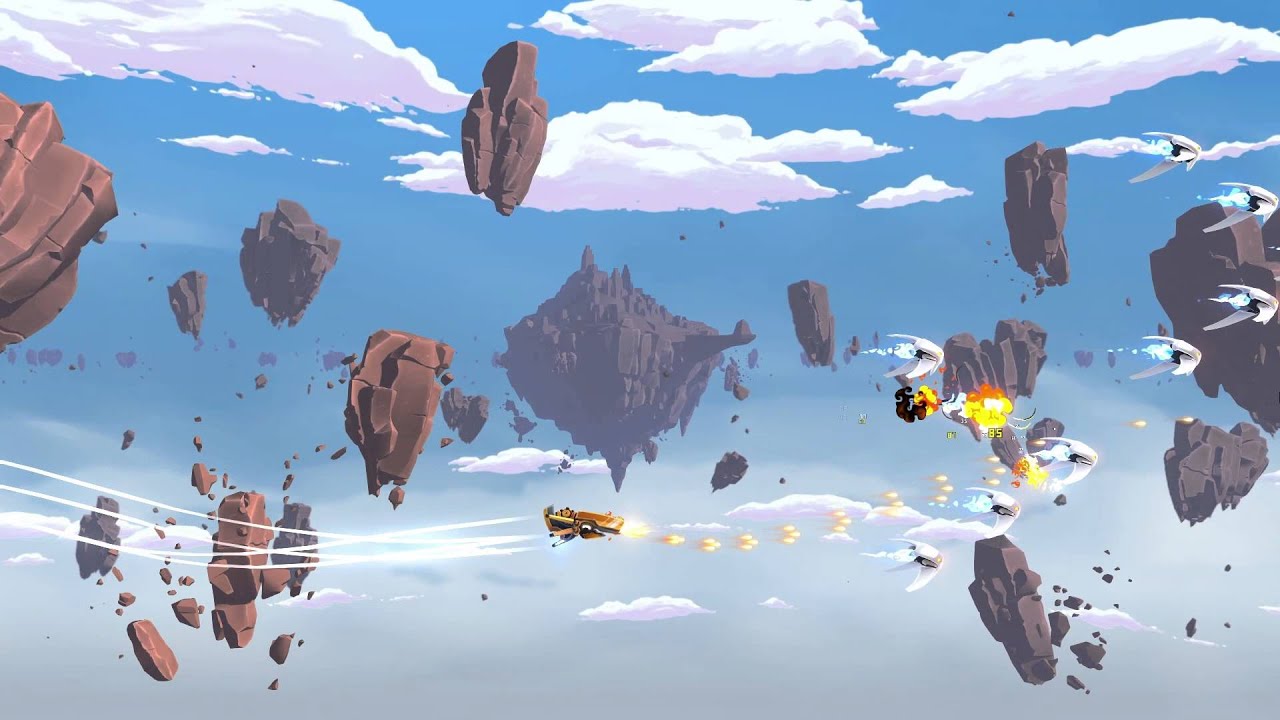 In conclusion, there is no denying that Drifting Lands is an enjoyable indie game. It tries to create a new experience and somewhat succeeds at it. Due to its grinding nature, however, it neither feels as satisfying as the old games nor does it have enough depth to carry forward as an RPG. If you can ignore its flaws and you want a fresh take on an arcade shoot’em’up, then Drifting Lands is worth the somewhat steep price.

Drifting Lands was developed and published by Alkemi. It was released for PC [reviewed] on May 5th, 2017. A press review copy was provided for The Hidden Levels. Many studios submit copies for site review but this is in no way factored into our review scores. Games are scored on their individual merits and our rating system is explained here.