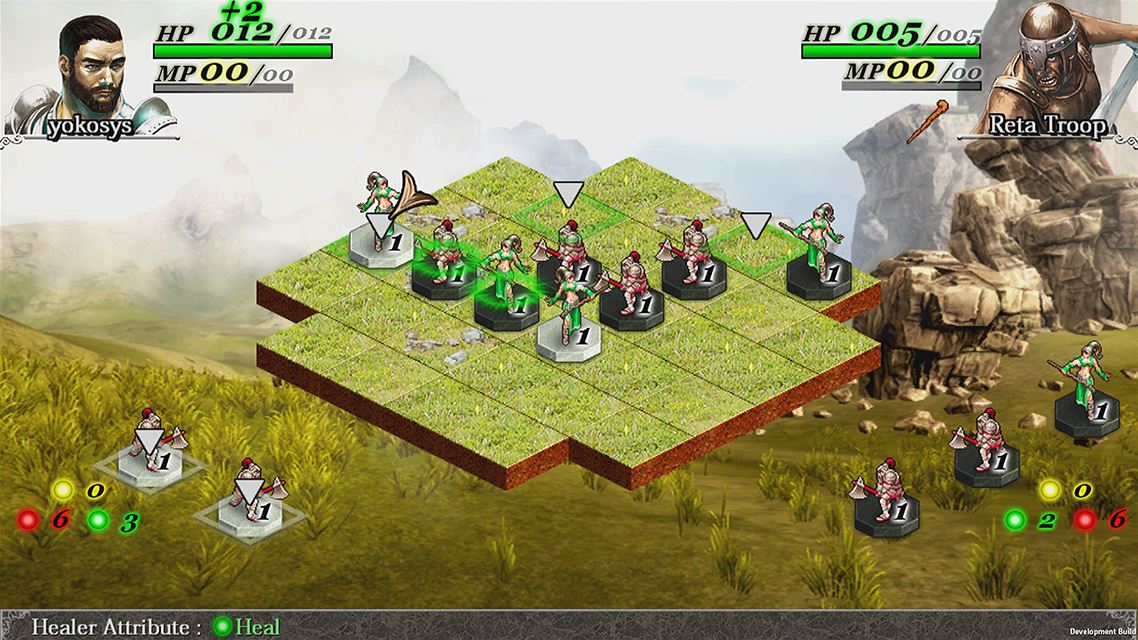 Rev Ersi Quest is a turn based board game with Role-Playing elements developed by Yokogo Sytems. It is set in a  fantasy setting and uses classic Reversi rules. The story revolves around two prosperous nations. Eventually, one nation is sent into turmoil and you, a mercenary, are tasked with invading the opposing nation and unifying Othelia Island. The game is divided into 9 chapters. Rev Ersi Quest is a fun twist on clssic board game ‘Reversi’. My inital reaction was that of excitement and anticipation, however the game quickly turned mundane and tedious.

The Spoils of War – At the end of each battle, depending on what tile you land on, spoils will be won. These range from equipment such as swords and axes to spells like Cure and Level Up. Rev Ersi Quest also allows you to win units. Units are the key mehcanics to winning battles. The more you have, the easier the battle will be. Another major mechanic, is that the spoils you win can be enhanced. If you win a battle and are rewarded with a copy of a sword you already had, the swords will be infused together and upgraded automatically to a sword+1. Customisation – Before you start the game, you will be asked to chose a male of female character. There arent any facial options. Its rather simplistic and a downside. However, your charatcer is able to level up and expand their troop size, allowing you to have more units. The option to customise your troops allows you to play the way you want. You can have offensive, mana and healing units. On top of that, you can also have enchanced equipment. These enhanced equipments are strong and their effects, depending on the equipment itself, will be activated should the correct requirements be met. These requiremtns tend to be very simple. They have a certain percentage to activate. My knife+3 has an attack+1 and will activate 41% of the time when I use a unit. I loved the various equipment peices available in the game. It allowed me to become a heavy damage dealer.

Replay Previous Chapters – I found that I was going back to previous chapters to level up my character. In doing so, I was becoming stronger for the chapters ahead. You wil lfind that the diffuclty for each chpater spikes substantially. You will have to replay previous chapters to level up and increase your troop size to be able to contest against the enemies in later chpaters. This offers up more replay value but becomes repetitve very quickly. You can also have a chance of unlocking new tiles that you didnt get on your first playthrough. With each tile haveing different rewards the possibilities are endless. Ultimately, it will lead you to become a stronger leader to fight in the later chapters.

The Art of War – Rev Ersi Quest does a very mediocore job at explaining the mechanics of the game. Sometimes, I would notice that it wasnt translated properly either. Every chapter, a new mechanic would be introduced that will play an important role in the outcome of the battle. These mechancis are glossed over and will take time to understand and master. For example, in Chapter 2 a neutral enemy would be introduced. This unit is still unfamiliar to me. Most of the time, what I read wouldnt sink in. I had to use these new units myself to understand properly. However, if you feel that you need to be reminded of the mechanics, there is a ‘Help’ option in the options menu that will go over what you have learned. This is very helpful for those that cant grasp the concept of the mchancis from the get go. Although, I could not find the descriptions of the individual units. Controls – The controls are clunky and inconsistent. Navigating the menus is tedious and trying to place units on the board is even more annoying. During battle, precise cursor movements is key. Placing a unit on a tile that you did not intend on , will screw up the battle in the long run. Sometimes, the cursor would snap from one button to another and other times it wont.

Although Rev Ersi Quest has poor controls, explanation of mechanics and  may become repetitive and mundane quickly, I found myself going back to it from time to time. Its a game that I can sit back and enjoy whenever I get bored.

Rev Ersi Quest was developed by Yokogo Systems. It was released on July 15th, 2016 and a press review copy was provided for The Hidden Levels. Many studios submit copies for site review but this is in no way factored into our review scores. Games are scored on their individual merits and our rating system is explained here.